It’s so invigorating, working in two languages at once. Ruby for the export and PHP for the import. It’s like dooking your brain in ice cold water every 5 mins. Very stimulating I must say. And indeed, it has resulted in the release of Oddbod 0.8.0 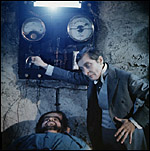 I’ve taken stock and decided to release the code as the next step is going to be a big one, files. In the meantime I’ve put the electrodes on Oddbod’s head and tagged it up in our svn. The 0.8.0 release has the following migration functionality, to get you from Elgg 0.9 to 1.5:

Oddbod also disables outgoing email notifications, as this can cause confusion in your user base when the friend networks are migrated. Users would otherwise get emails saying they have new friends, which they already know, as the friend network is coming hot off the press from 0.9.

If you want to give Oddbod a trip out of the lab, you’ll need an svn client and feed it the following command:

The above will get you a directory called oddbod, with import and export directories within. Read export/README for instructions on how to get your data out of 0.9. That will give you a load of ODD XML files, in export/oddfiles. Just transfer those ODDies to your 1.5 server, drop import/oddbod into your mod directory, enable, add to your dashboard and feed it the ODDies one by one.

Oddbod likes onions, which is why the data is layered onto 1.5. It’s more manageable, building up each layer, one on top of the other and you can test at each stage to see if Oddbod is behaving. I’ve tested it between 0.9.2 and 1.5 and it works ok for me. If you fancy jolting the volts into Oddbod, flick that switch and drop me a line if there’s any problems.

Why is it called Oddbod you might ask? Well, the data migration is based on ODD files and when I initially started on it, I wasn’t sure whether it was possible, so it was a big experiment in taking live objects from one place to another, which is what Oddbod, the hairy round the edges character from Carry on Screaming, excelled at!

The next stage is to migrate the files from 0.9 but that’s going to be tricky as folders have been removed from 1.5.

In the meantime, give Oddbod a go, he might be able to get you out of 0.9